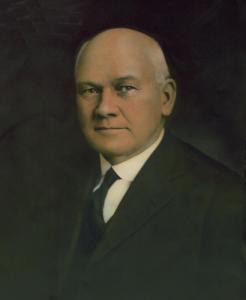 C.B. Platt came to Carthage in 1874 with his family as a boy of 11. Born in Illinois in 1863, the family left Illinois and resided in Iowa for a few years before coming to Carthage. By February 1875 C.D. Platt opened the C.D. Platt Plow Works at the corner of 5th and Grant. C.B. worked with his father at the Plow Works and learned about the manufacturing business from his father.

In 1888 C.B. and his brother-in-law, Joseph Leggett began working together in the plow works. Leggett was an inventor and Platt could build what his sister’s husband invented, so it was a perfect union. When J.P. Leggett invented the Leggett bedspring, C.B. Platt put up the few hundred dollars he could raise against J.P. Leggett’s patents and the bedding industry was changed forever, as was Carthage.

Known for his business acumen and his service to the city of Carthage, when the Board of Public Works was formed in 1908 to oversee the new water service to Carthage, he was chosen to lead the board and did so until his death in March 1929.

In 1926 Cornelius Platt joined with George Porter, local wholesale grocer to form the Platt-Porter Co. in addition to his partnership with Joseph Leggett. After their new building was completed at 527 S. Main (later for many years the offices of The Carthage Press), in 1926 they roasted and ground 200,000 pounds of green coffee beans that yielded 165,000 pounds of coffee.

Leggett & Platt, Inc. now employs almost 2,000 people locally and thousands on a world wide scale. There are facilities in 18 different countries globally and the company is still known for its mattresses, as they are now called.  Carthage is still proud to be known as home to Leggett and Platt.