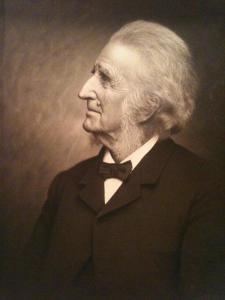 Gustav Cassil was born in Steubenville, Ohio in 1826 and learned the art of making money from his father when he helped him run his newspaper, railroad and retail endeavors. Gustav wanted adventure and lied about his age in order to join the war effort against Mexico when he was only 14 years old. After surviving the war, his next adventure was to join the people flocking west during the gold rush.  He was good at it and found a lot of gold doing placer mining and returned to Ohio in 1851 with a pocket full of money to marry his sweetheart, Emily Pickett.

The couple stayed in Ohio until migrating here in 1866 after making a trade with a man who owned land in this area.  He traded his oil business in West Virginia for 57,000 acres of land in southwest Missouri. There was a boom going on at the time with many people carrying large sums of cash with them, including Gustav Cassil. He carried so much cash on him that he convinced his wife Emily to sew pockets inside her clothing to carry cash. There was such a demand for this that Emily convinced some of her friends to help her carry this cash.

He realized that the town badly needed a bank, and in 1868 he formed the Bank of Carthage and was its President until 1880. He was one of the original town trustees and helped incorporate Carthage as a City. He worked closely with Judge Malcolm McGregor, and one of their projects was to buy 40 acres west of town and form Cassil Addition. A few of the palatial homes are still there today on what is now west Central. He and his wife built a palatial home there, but lost it to fire before they moved in. They moved 100 yards east and built another home. Emily died in 1892.  In 1907 he donated a small lot to the city for the first YMCA.

The last of July 1909 Gustav Cassil told his son Rodney that he’d had a message during a dream telling him he would pass away the latter part of the second week of August. He died on August 9, 1909 and is buried in Park Cemetery.