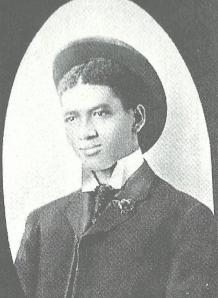 Born in Neosho in February 1885 to James Scott Sr. and Molly (Thomas) Scott, both former slaves, James Scott grew up to be one of the top 3 Ragtime composers, with Scott Joplin and Joseph Lamb. His mother taught him the basics of piano playing as she did with all of her 6 children.

In 1901 the family relocated to Carthage where young James attended Lincoln School and the following year he began working at Charles Dumars’ music store, sweeping the floors. He soon began demonstrating pianos.

He would play some of his own compositions as well as those of others, and soon people began asking where they could buy the sheet music they were hearing. In 1903 Charles Dumars printed the sheet music to A Summer Breeze, Scott’s first published sheet music.

He would come back to this area and play at Lakeside from time to time. Although Lakeside was segregated, that did not apply to performers.  He had frequented Lakeside, as a performer since 1902. He was the director of the Carthage Light Guard Band for a time and the only one of his siblings to pursue a musical career despite all of them showing musical talent.

In 1906 he moved to St. Louis where his friend Scott Joplin introduced him to publisher John S. Stark who published Frog Leg Rag. By 1914 he moved to Kansas City and married Nora Johnson, supporting them by teaching music and playing for silent movies. When talking movies came along he lost that position. Nora died in 1930 and as they had no children, he was alone. To keep himself busy, he continued to play with his newly formed band, mostly private engagements when work could be found.

James Scott died in 1938 of kidney failure and hardening of the arteries in Kansas City. He and Nora are buried together in Westlawn Cemetery in Kansas City, Kansas.