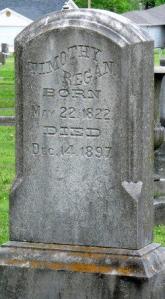 Timothy Regan was born in Ireland in 1822, and arrived in Carthage (according to family tradition in a covered wagon with $200,000 sewn in his clothing) in the late 1860s and was instrumental in forming the town. Peter Hill won the mayoral election of 1873, but could not fulfill his obligation and Timothy Regan was appointed the 2nd mayor.

Two of the buildings on the west side of our Square were built by Regan, the building at 331 S. Main and 319, 321 and 325 S. Main. The latter was the first brick skyscraper in Southwest Missouri. The buildings on the Square were made of wood, often thrown together, but Regan decided to build his of brick. It towered 3 stories in the air until 1907 when fire damaged it so extensively on the 3rd floor, that the entire floor was removed.

His biggest contribution to the City of Carthage was his donation of 20 acres of land west of town, now known as Park Cemetery where generations of families have their final resting place. The gates to the cemetery were built especially to accommodate carriages, with two smaller gates for foot traffic. The first two burials, in August of 1879, were relocations from the City Cemetery that is now Central Park.

Timothy Regan got into a dispute with the city in 1880 over sidewalk enlargement in front of his building and he moved to Springfield, vowing never to return to Carthage, so he turned the management of the cemetery over to his son Samuel. Samuel ran the cemetery until ill health forced him to form a cemetery Association in 1910. The grandson of Timothy Regan, Albert Hesselgrave, managed the cemetery with his wife Adah until their deaths. It is now privately owned, yet maintains the same high standards.

Although Timothy Regan vowed never to return to Carthage, he returned in December 1897 when he died and is buried in Park Cemetery.