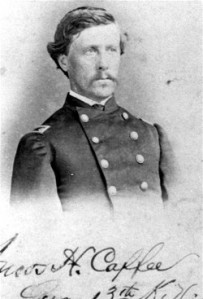 Dr. Caffee was born in Newark, Ohio to Mahlon and Elizabeth Warden Caffee October 18, 1834. He grew up in Newark and became interested in medicine and began studying under a local doctor in Newark. He then studied a course of medical lectures in Cincinnati.

He arrived in our area in 1858 and settled first in Sarcoxie and then in Carthage in late 1859. When
the Civil War began, Dr. Caffee went to Fayetteville, AR and enlisted in the Union Army as first assistant
surgeon of the 1st Arkansas Calvary. By 1864, he was a surgeon of the 14th Kansas Infantry. Following the war he traveled the entire area.

Upon mustering out of the service in Leavenworth, KS, he came back to Carthage and resumed his medical practice. In 1866, he and J.W. Young opened the first drug store in the county just off the northwest corner of the Square. Dr. Caffee married Lacie Ann Burham on May 21, 1867 making her the first post war bride in Carthage. She was from Washington, Ohio, but they came back to Carthage and built a house at the corner of 3rd and Maple. They became the parents of 6 children through the years.

Dr. Caffee bought out J.W. Young and sold his nephew, Col. W.K. Caffee, an interest in the drug store.

By 1890 Dr. Caffee was busy organizing the Central National Bank and was President until his death.

After Joplin was formed, he opened with his nephew, the first drug store in Joplin.

Dr. Caffee was twice elected Mayor of Carthage and was elected county treasurer of Jasper Co. in 1880.

He belonged to the Masons, the Elks, Loyal Legion, Knights Templar and Grand Army of the Republic.

Dr. Amos H. Caffee became ill the night of his birthday and died 5 days later on October 23, 1908 of uremia. He is entombed in the Caffee mausoleum in Park cemetery.