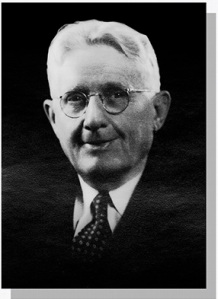 George Beimdiek Sr. was born in St. Louis in 1876 and made his home in Carthage in 1905 after earning his law degree. In 1910 he married Ida Brinkerhoff of Carthage. Despite being a member of the Jasper County Bar Association, he never practiced law in Carthage.

He served as president of First National Bank from 1927 to 1931 until it merged with Central National Bank. He was also one of the early directors of Jasper County Savings and Loan from 1931 to 1943.

In 1935 he became president of Leggett & Platt and held that position until 1953. He remained on the board until 1959. In 1932 Mr. Beimdiek had formed an association with B. L. Van Hoose and the B-V Realty and Investment was formed.

He served on the Vestry of Grace Episcopal church for over 20 years, serving several terms as Senior Warden. He was on the McCune Brooks hospital board for 25 years and those years were during the construction of the new hospital built in 1929 and located on Centennial.

He became ill in October 1960 while visiting in St. Louis and before he could recover he fractured a hip in a fall and never recovered enough to return to his home. He was moved from St. Louis to Carthage so
he was able to be in the hospital that he’d helped create when he died on February 10, 1963.