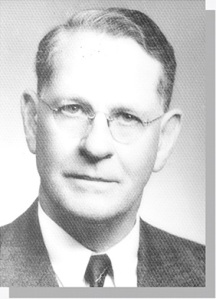 H. W. Putnam was perhaps Carthage’s most successful entrepreneur of the early twentieth century. The nationally known lumberman was born in Carthage on June 8, 1878, to pioneers Walter and Sarah Harrison Putnam. He graduated from High School in Clinton, MO in 1895 as Salutatorian of his class. When his father’s mill burned, he returned to Carthage and went to work for his uncle Al Harrison in the lumber business.

Early on he was associated with J. P. Newell in the Carthage Market Fair, forerunner of the Knell Fair and Jasper County Fair, and earned a significant profit which enabled him to become an owner of the S. H. Regan Lumber Company and the Harrison-Calhoon-Harrison Lumber Company (later known as Calhoon-Putnam) in late 1899.

About 1905, Putnam decided to enter the commission lumber business in order to profit from the activity in the lead and zinc mines. He hired Frank N. Jones, Sr. to co-own and run this business, known as Putnam and Jones and Broadview Lumber Company, and by the 1950’s it was reportedly the largest independently owned wholesale lumber business west of the Mississippi River, with offices throughout the Midwest.

From the 1920’s through the 1940’s, Putnam expanded the retail lumber business, known as Lumber Specialty Company, and later as Tapjac Lumber and Building Centers, and he developed business partnerships across the four state area which over the years included ownership in more than 100 lumber yards. His wife, Anna Andrews, who came to Carthage from Maine in 1899, was an equal partner in all his business affairs. They married in 1904 and had three sons. After the Bank Holiday closed many local banks in 1933, Putnam, who was one of the larger owners of The Bank of Carthage, was asked to obtain bank charters in Aurora and Mt. Vernon, MO. He served on the boards of those banks until his death.

Putnam loved Carthage and always said the best part of any trip was coming home. Some thought him gruff, but he had a heart of gold, quietly putting many local fund raising campaigns over the top. He worked tirelessly for the Missouri Crippled Children’s organization, was a Rotarian and member of the Board of Public Works.

He died of a heart attack in 1948 at age 69, and Carthage is a better place due to the efforts of Harry Putnam.