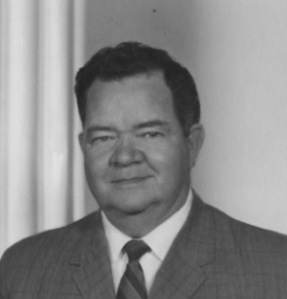 Lensy Lane, known to all as L.P. or “Sarge” was a nationally known amateur boxing official.  As a matchmaker, and local, regional and national judge, he had no peer.  He was a friend of boxers and amateur boxing officials throughout the United States.  The respect he attained in boxing circles culminated i his being elected to the National Silver Gloves Hall of Fame and the National Golden Gloves Officials Hall of Fame.  He served the National Silver Gloves as Vice President and was Silver Gloves Director for Region 5.  He was a longtime official for the National Golden Gloves, serving as ring captain and a member of the registration and weigh-in team.

L.P.’s interest in sports did not stop with boxing.  For years he assisted in staging USSSA baseball and softball tournaments in Joplin.  His energy was legendary.  Many days he was at the complex early in the morning and remained until the final games were completed, sometimes well after midnight.  Lane Field at Four Seasons Sports Complex was named in his honor.  Earlier in his career, Lane coached semipro baseball teams in Carthage and Neosho and he played slow pitch softball until age 71.

Lane was born in Garfield, Arkansas in 1924 and graduated from Northeastern Oklahoma A & M College in Miami, OK with a business degree.  He served in the U.S. Army in World War II and was  Master Sergeant.  He then served in the U.S. Army Reserves and National Guard for many years.  During WW II, he was part of the D-Day invasion at Omaha Beach and was wounded at the Battle of the Bulge, taken behind the lines, patched up and went right back to the front lines.  After the War, “Sarge” went to work at Putnam Lumber Co. in Picher, OK, and lumber yards in Pryor, OK and Seneca, MO before moving to Carthage in 1958, where he worked as an auditor for Lumber Specialty Co./Tapjac Lumber for 50 years.  In 2010, he was awarded the Legion of Honor Medal by the Government of the French Republic for defending their country.

His forte was matchmaking, but he earned respect for his mentoring of young people who needed a way to find self esteem.  He married Lorene Hale in 1945, and they were parents of two sons and a daughter.  L.P. lived in Carthage for 52 years and died at the age of 86 in 2010.