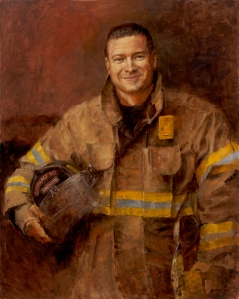 Steve Fierro was born in Modesto, CA on December 19, 1963. His family moved to Carthage in 1973, where Steve attended Eugene Field School, Carthage Jr. High School, and graduated from Carthage Sr. High School in 1982 where he participated in track and field and played varsity football. He  was also active in Student Council, and at Student Government Day, as a precursor to his chosen profession, he served as “fire chief for a day” two years in a row. He was an avid outdoorsman and loved hunting, fishing, golf, and baseball.

In 1984 he married Teresa Harryman and they were the parents of two children, Courtney and Caleb. Steve was very involved in his children’s activities and was a devoted husband and father. He was a member of Christ’s Church of Oronogo where he was a member of the hospitality team, and he was honored to serve communion to his church family on a regular basis.

Steve attended the Fire Training Academy at Crowder College, receiving his Firefighter I and II certificates in 1991 and 1992. He began his firefighting career as an Engineer for the Neosho Fire Department. In 1994 he began working for the Carthage Fire Department, fulfilling a lifelong ambition of becoming a firefighter. He also received his EMT license and served his community by working at Newton County Ambulance, METS, and McCune Brooks Hospital. He regularly attended local schools to educate children about fire safety.

Steve joined the Forestry Service and volunteered to fight fires in Florida, California, Oregon, Washington and Montana. Tragically Steve made the ultimate sacrifice, dying of smoke inhalation while serving his community fighting a fire near Diamond, MO on February 18, 2004 at the age of 40.

The Steve Fierro Memorial Scholarship Fund was established by the members of his Carthage High School graduating class and has provided over 30 scholarships to the Missouri Southern State University and Carl Junction Fire Academies. He was honored at the Red Cross annual Hero’s Breakfast in April of 2004, and was inducted into the National Fallen Firefighters Memorial at Emmitsburg, Maryland in 2005. Steve is buried in Park Cemetery, Carthage.