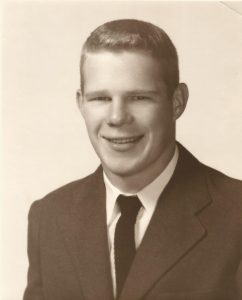 H.B. Davis, Jr. was born at McCune-Brooks Hospital in Carthage on December 10, 1938 to Howard Bruce “Red” Davis, Sr. and Evelyn (Warden) Davis. He grew up in Carthage, attending Eugene Field, Mark Twain, Pleasant Valley, and Hawthorne schools, and graduating from Carthage High School in 1957. In high school, he played varsity football as a fullback under head coach Jack Wallace. During his junior year, the team won the conference championship with an undefeated season. H.B. was chosen for the National High School All-America Team and was voted to the 2nd team All- Big Nine team. He amassed 710 yards on 121 carries.

During his senior year at Carthage High School, H.B. played fullback and led the Big Nine in scoring with 101 points. The team tied for 2nd in the conference. He was the only unanimous selection for the Big Nine All- Conference Team. H.B. was voted 1st team on the All-Ozarks team as a halfback, again selected as an All American, and selected 3rd team All-State as a halfback. At that time, there were no state football playoffs and no school classifications, and only 9 halfbacks were selected from across the state.

Recruited by Missouri, Arkansas, and Oklahoma, H.B. first decided on Mizzou, but then returned to Joplin Junior College to play football as a fullback. He was co-captain of the team. During his final year, he was selected for the Junior College All-America Team and voted MVP by his teammates.

In 1959, H.B. enrolled in Kansas State College of Pittsburg to pursue a degree in Education and left playing behind. He married Carla Taylor in 1961. H.B. received his degree in 1962 and began teaching and coaching high school. From 1964 to 1967 he returned to Carthage High School to teach social studies and serve as assistant football coach under Russ Sloan. He continued teaching and coaching around Missouri, and in 1973 moved to Carl Junction High School, first as assistant football coach for 7 years, and then as head coach for 14 more. During his time as head coach, H.B. led his teams to shared Big 8 Conference Championships in 1982, 1983 & 1984, a Big 8 Conference Championship in 1989, as well as District Titles in 1988 & 1989.

H.B. and Carla have two daughters, Jennifer and Susan, four grandchildren, and one great-grandchild. Since retiring from coaching in 1994, H.B. often plays tennis, golf, and fishes. He was inducted into the Carl Junction Athletic Hall of Fame in 2016.