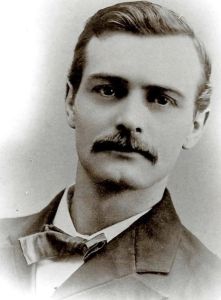 F. W. “Fred” Steadley came to Carthage as a jeweler in 1890, and died in 1928, as “the city’s greatest industrial leader,” according to his obituary in The Carthage Press. Born in Galena, IL on Oct. 25, 1857, to Balshazzer and Katherine Stuedle, who came from Germany about 1853, the family soon moved to Lexington, MO, where Fred spent his early years. After his mother died and his father remarried, he moved to Carrollton, MO about 1875 to learn the jewelry business, where he “Americanized” his name to Steadley. There he married May Darr in 1881. In 1890, with their two boys Rae and Kent, they moved to Carthage when he purchased A. J. Kirke’s jewelry store at 303 S. Main St. (now part of Carthage Deli). May became an invalid and died in 1898. Later that year Fred was elected Jasper County Recorder, serving a four-year term. By 1899 he became interested in the quarry business, and married Stella-Vere Hennessey of Chicago that year.

He became associated with the O’Keefes, McNerneys, and Col. Phelps in the Carthage Quarry Company, which had a total of about 10 acres. Fred became manager in 1907, and eventually consolidated ownership and changed the name to F. W. Steadley & Company. He was a pioneer in realizing the value of and pushing the interior finishing uses of Carthage marble, which largely revolutionized the industry. F. W. became the undisputed leader in the Carthage marble industry, growing his business to about 300 acres, which became known as “The Big Quarry”. In 1927, Fred sold The Big Quarry to the consortium that became known as Carthage Marble Corporation, with his son Kent becoming its first president.

F. W. also became a stockholder in Carthage Superior Spring Bed Mfg. Co. in 1907, and by the early 1920’s had obtained full control of that business, changing the name to Carthage Spring Bed Company. This business was located at N. Main St. and Eldorado. As Fred’s health began to fail, he asked Kent to leave Carthage Marble and take over the spring bed business. About this time, the premises was destroyed by fire, and one of Fred’s last acts in business was to buy the Juvenile Shoe Company plant on River Street just a week before he died on April 9, 1928 at age 70. Under Kent’s direction, this business became known as The Steadley Company.

Mr. Steadley also showed his great faith in Carthage through the purchase and improvement and construction of business properties. At his death he was probably the largest individual holder of business real estate in Carthage.  His estate was passed to his wife Stella, and to his sons, and later became a large part of the assets which we know today as The Steadley Trust. He is buried at Park Cemetery.