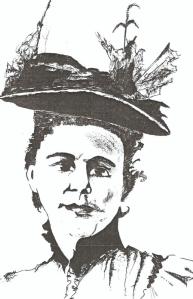 Annie Baxter was the first woman elected to public office in Missouri. Born in 1865 in Pennsylvania to John and Jane Beck White the family moved here in 1877. After graduating from Carthage High School, Annie married Charles Baxter in 1885.

Annie worked for the County Clerk as a Deputy Clerk and in 1890 was urged to run for the position when the Clerk retired. She won the election with 3,720 votes, or 53% of the vote, and was sued by her opponent on the grounds that the statutes describing the duties of County Clerk referred to the Clerk as “he”.   Fisher, her opponent, won the trial on a county level, but the verdict was over turned by the Missouri Supreme Court, making her the first woman elected to this office in the United States.

In 1894 she lost her bid for re-election. The Commissioners had approved the hiring of her husband Charles as Deputy Clerk at $125 a month and her enemies made much of the fact that in addition to her annual salary of $2,000 he drew another $1,500. The economy was poor in 1894 and in a clean sweep to get the Democrats out all across the country she lost in 28 of 38 precincts in the county.

She and Charles divorced and she moved to Jefferson City where her political contacts were located. Secretary of State and former Carthage resident Cornelius Roach appointed her State Registrar of Lands, a position she held for 8 years.

She died of pneumonia in June of 1944 and was buried in Jefferson City. Annie Baxter was not only intelligent, extremely competent and a trail blazer for women but she had enormous influence on Carthage, Jasper County and the state of Missouri as well.