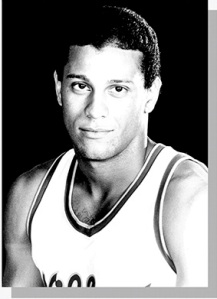 Joe Wright was born in Carthage in 1963, to J. C. and Elaine Wright. His athletic ability was evident at an early age. By 1975 he had pitched a no-hitter in Little League baseball, and he was a member of the Carthage All-Stars, who won the Missouri State Championship. While he also lettered in football and track at Carthage High School, he excelled in basketball, breaking the all time career scoring record with 1,591 points, a mark that still stands in 2013. His senior year of 1982 he averaged 28.6 points and 12.0 rebounds per game and made 56 percent of his shots. He was named All Conference, All District, All State and to the Street’s and Smith’s High School All American team in both 1981 and 1982.

Joe received a basketball scholarship to State Fair Community College where he was All Conference, All Region, and named second team Junior College All American 1985.  He was one of 15 Junior College players in the nation to be invited to try out for the Olympic team in 1984. He was elected to the State Fair Athletic Hall of Fame in 2010.

In 1985, Joe received a basketball scholarship to Kansas State University, where he became a starter. He is still listed among the all time best scorers in the Kansas State Media guide, scoring 782 points in two seasons. As of 2012 he was ranked #20 in KSU history in single season scoring, #9 in career field goal percentage, and #10 in Big 8 Conference single season scoring average (18.9 ppg in 1986). Joe is one of only 35 players in KSU history to score over 30 points in a game. On January 23, 1985, Joe made 11 of 11 field goals vs. Oklahoma State, setting a Big 8 Conference record that still stands. He and Norris Coleman are the #4 all time “scoring tandem” in KSU history. Joe was named Big 8 Player of the Week in both 1985 and 1986.

After earning his BS in Social Science, Joe was drafted in the 2nd round of the Continental Basketball Association draft, and later played professionally for 13 years in eight foreign countries, where he often taught Junior League basketball skills on the side. Joe now lives in Carthage with his wife Karina, twin daughters, Madeline and Mikayla, and sons, All and Always. He frequently gives basketball clinics, and can often be found here at the YMCA helping youngsters.