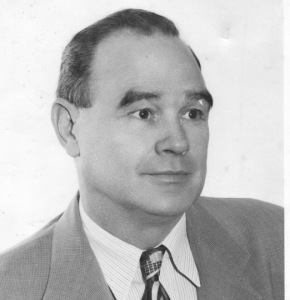 Elza Johsnon was born in Kirbyville, Missouri on January 26, 1904 and became a Carthage resident in 1917.  He graduated from Carthage High School in 1922 and headed to college.  He first attended William Jewel College where he earned his BA degree in 1926, and then went to the University of Missouri School of Law, receiving his law degree in 1928.  In 1933 he married Mayetta Louise Judd.  The couple had two sons, Ben and Thomas, and one daughter, Alice.

In addition to being a respected attorney, he was very civic minded – a member of the Lion’s Club, and a 26 year member of Carthage Kiwanis, having been instrumental in its formation.  He was named Carthage Lions Club Citizen of the Year in 1973.  Civic activities included being incorporator and first President of Jasper County Social Services, the board that administered Fair Acres and Elmhurst Nursing Homes.  He was secretary of the Carthage Chamber of Commerce board, a member of Carthage City Council, and served as Carthage City Attorney.  He was Chancellor Commander of the Knights of Pythias Lodge, and active in Boy Scouts for 15 years both as a Scoutmaster and President of the Mo-Kan Area Council, serving several counties in Missouri and Kansas.  He served in the Missouri State Legislature and as Jasper County Probate Judge.

Elza was also a member of the Carthage Board of Education, the Board of Public Works and the Carthage Library Board.  In addition, he was active in several baseball leagues, including Little League and the inter-city baseball leagues.  He also sat on the board of the American Red Cross and was a member of the Jasper County Bar and Carthage Lawyers Association.  During World War II he was a Captain in the Judge Advocate General Department of the Missouri State Guard, a member of the Rations Board, and served on the Selective Service System Advisory Board for 30 years.

He was an ordained minister in the Christian Church and also taught Sunday School at First Presbyterian Church and conducted services at many rural Presbyterian churches in the Carthage area.  He was known to have done income taxes for a cup of coffee, and to donate legal services if the client could not pay.

After being hospitalized for five months in Springfield, he passed away on December 8, 1975 and is buried in Park Cemetery.